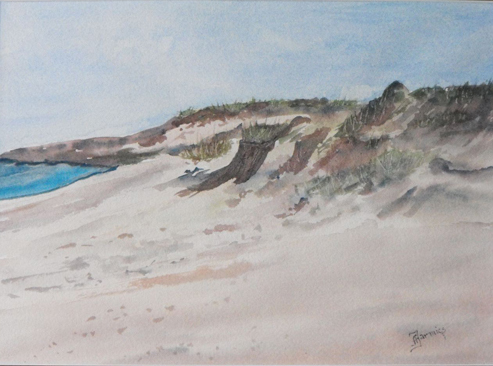 One of Anna’s other skills is that she is a champion darts player. As with painting, one can only marvel that she manages to compete at all, given that she has no hands. Be that as it may, she has been the Canadian seniors champion a number of times. The darts “Olympics” which she attends every year have given her ample opportunity to travel throughout Canada. In 2002, darts brought her to Prince Edward Island where she caught this scene.

“I was in PEI for the Canadian Olympics Senior Games, representing Alberta in darts. We competed in Charlottetown. This scene is not far from Anne of Green Gables’ house.

I loved the sand. It was absolutely beautiful. It felt almost as soft and fine as flour. Something drew me to this particular view. There were much more spectacular views of the ocean near by, but my heart was drawn to this. It’s not man-made. It’s God’s creation. So very peaceful.”