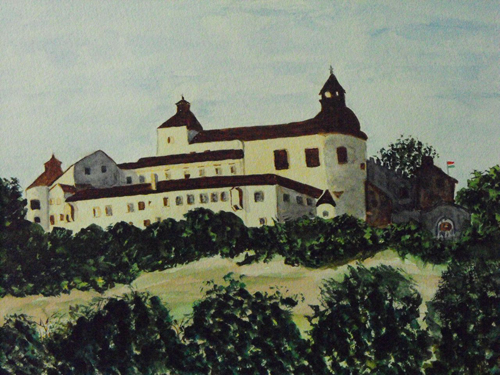 In the biography section of this website, we recount the story of Anna’s amazing escape from Soviet Hungary. The story of Hungary throughout the early part of Anna’s life, first under Nazi occupation and then under the iron rule of the Russians, is not one that many north Americans even know about but obviously of great significance to those who survived such troubled times. Certainly, this painting, and the castle depicted, has a sense of alienation about it, bringing to mind an other eastern European masterpiece by the same name, Franz Kafka’s The Castle.

And yet for all that, Anna has fond memories of it: “When I was a child we would sit and listen to the music coming from this castle. It was built in the 14th Century, and I went through it on a school trip years and years ago. I guess in a way it’s always been a part of my life. Even when I was very young, my father worked on the railway and his train would go quite near it. I remember him coming home and talking about it. It was a very mysterious and yet magical place.”